Welcome to the website of the Ancient Lviv Museum.

We invite you to join us in the history of the ancient city of Lev, full of legends and heroic deeds

Our goals and objectives

To consolidate the citizens of Lviv around the history of the city.

To raise the Ukrainians through the history, national and cultural heritage, historical and national traditions

To perpetuate the memory of the Ukrainian people’s historical heroes, famous figures of science and culture

The Unique Character of the Museum

The interactive innovative multimedia museum, which tells about more than a thousand years of history of the city of Lev from the earliest times to the XVIII century. Museum is a conceptually and ideologically enhanced interpretation of ‘Madame Tussauds’ museums”

The exhibitions illustrate the life and activities of prominent historical personalities who played a significant role in the development of the city from 1256 to 1772.

There are the brief but illuminating biographies of notable residents of Lviv, who influenced its history from the time of its foundation in the XIII century to the end of the XVIII century.

We emphasize that Lviv developed thanks to representatives of different communities: Polish, Armenian, Jewish, German, Austrian, Hungarian, Czech and others.

There are 11 exhibits, 600 square metres. We use information panels, maps, texts, iconography, touchscreens, monitors for showing the history. And, above all, there are sculptures of historic personalities to illustrate the history of Ancient Lviv.

On the 20th of March the Museum “Ancient Lviv” will host the presentation of the sword of Hetman Petro Sagaidachny.…
05.08.2021
Uncategorized

“100 Days of the Ancient Lviv Museum”

We will celebrate our first small anniversary soon. 100 days of the Museum “Ancient Lviv”. During that time we have…
05.08.2021
більше новин 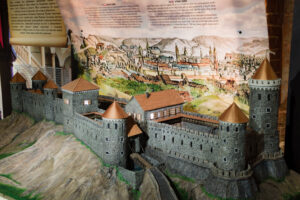